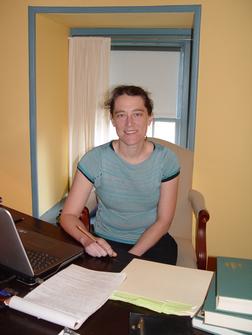 Emily is an Environmental Historian and Historian of Ecology. Emily spent her time at Grey Towers finishing her book manuscript, Money Trees: The Douglas Fir and American Forestry, 1900-1949. This book explores the history of American forestry from the beginning of the 20th century to the 1940s. She works at the Max Planck Institute for the History of Science in Berlin.

“Grey Towers was an especially great place to be because I write about Gifford Pinchot’s interests in the direction of professional forestry not only while Chief Forester, but also afterwards. It was fantastic to be in his home where he developed so many of the ideas and write so many letters that I consider in my work. It was lovely to have some time away from the daily press of life to focus entirely on my manuscript. Being in such beautiful surroundings, and amongst the wonderful people who staff Grey Towers, made my time all more precious.”

“Bundok: The Mountains of the Philippines and the Geography of Warfare” Wilderness Babel, www.environmentandsociety.org/content/bundok-Filipino (May 2014)