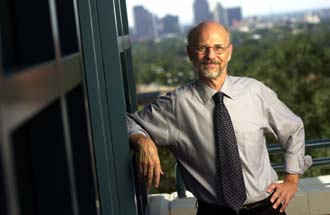 I have been spoiled. Very spoiled. I have always loved Grey Towers, having worked with its extraordinary staff since the late 1980s. Even more ideal was the ten days I spent at Grey Towers in the summer of 2012: freed from daily distractions and obligations (even email!), aided by a knowledgeable and generous staff, and nestled into the quiet scholar’s tower office, I could read, reflect, and write. All day, every day. A dream come true! As dreamy was the book that emerged from this intensive effort, Seeking the Greatest Good, a study that melds together the histories of Grey Towers, the Pinchot Institute, the Pinchot family, and the Forest Service (see list below).

On the Edge: Water, Immigration and Politics in the Southwest (2013) (Book)

Gifford Pinchot and the Making of Modern Environmentalism (2001; 2004) (Book)