Gifford Pinchot was passionate about ensuring that natural resource conservation was for the “greatest good” of the “greatest number” of Americans. Brandon’s interest in Pinchot’s sometimes controversial tactics is explored in his project, “Hired, Fired, Admired.” 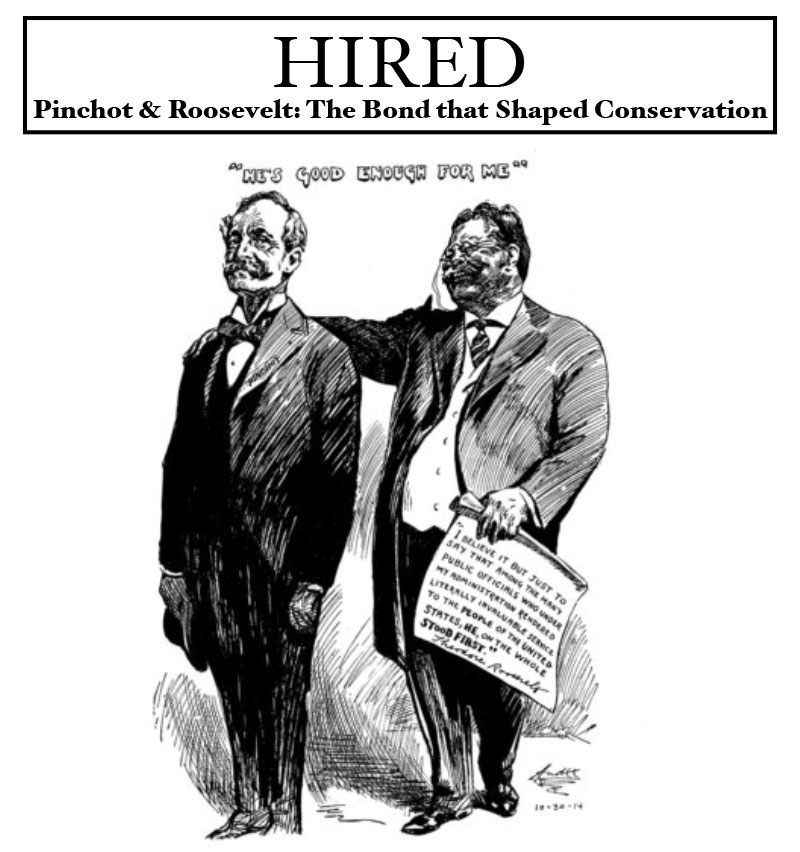 It certainly can be suggested that in terms of dedication to the conservation movement, no duo could top Roosevelt and Pinchot. By all means, Pinchot was a fanatic, but Roosevelt learned to harness Pinchot’s energy and effort to create meaningful conservation progress. The two men shared a close relationship which elevated Pinchot’s authority far beyond any other bureau director. Pinchot used his inflated power to codify conservation into federal law to ensure the continuance of the movement.

As the scroll above reads, Pinchot’s efforts led President Roosevelt to conclude: “that among the many public officials who under my administration rendered literally invaluable service to the people of the United States, [Gifford Pinchot], on the whole stood first.” 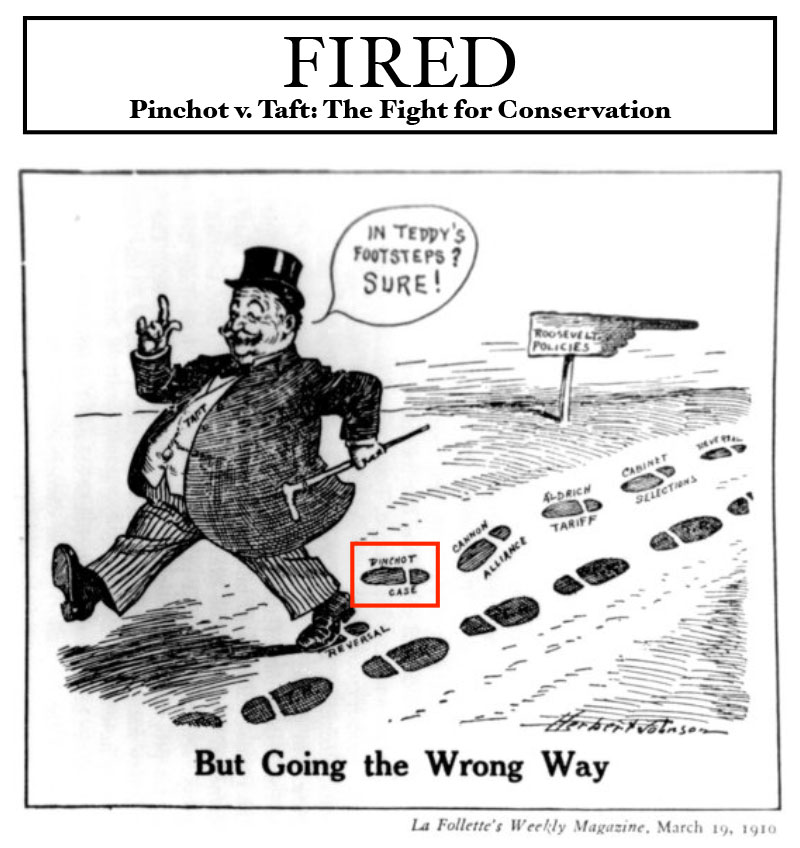 After Roosevelt’s handpicked successor William Howard Taft won the Election of 1908, Pinchot and Roosevelt devotees became increasingly wary of the incoming President. Pinchot saw Taft’s nominee for Secretary of the Interior, Richard Ballinger, as a grave threat to conservation. Pinchot’s fears quickly materialized into conflict. The climax of this conflict became known as the Ballinger-Pinchot Controversy regarding the use of federal coal lands in Alaska. Pinchot publicly criticized Taft and called for a Congressional Investigation into Ballinger’s suspicious handling of federal lands. While Pinchot got his Congressional Investigation, Taft responded by firing Pinchot for insubordination in January 1910.
Taft’s break with the Roosevelt Administration was now complete. 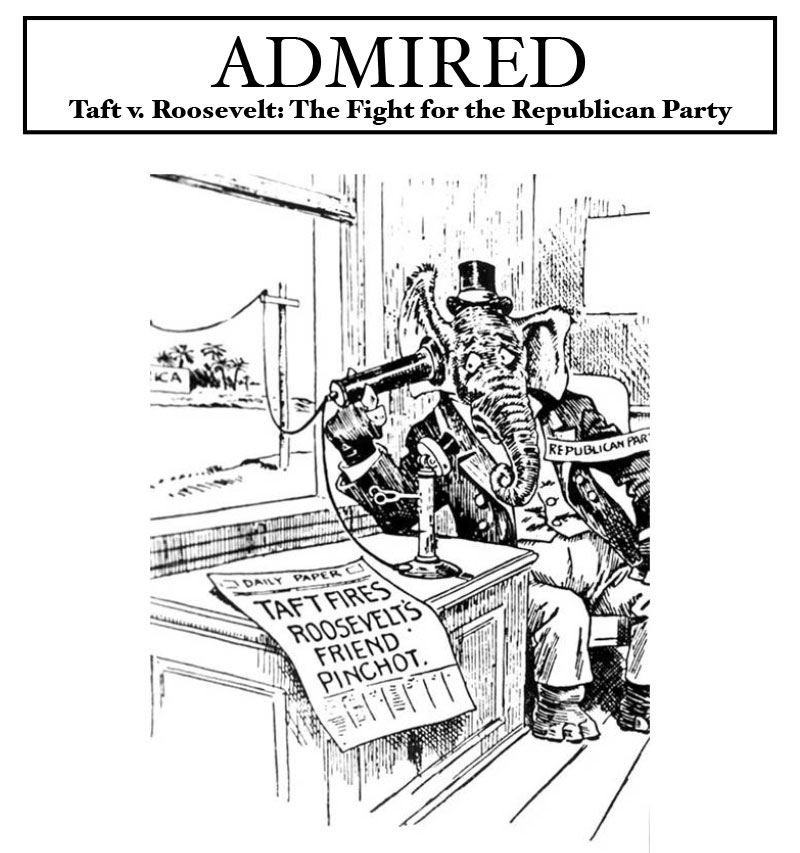 Admired: Taft v. Roosevelt: The Fight for the Republican Party

After he was fired, Pinchot would serve as the liaison between Roosevelt and the Insurgent wing of the Republican Party working to convince Roosevelt that the Insurgent Republicans needs his popularity to defeat Taft. While he was largely more popular than Taft, a biased nomination process in the incumbent’s favor denied Roosevelt the Republican nomination. In response, Roosevelt launched and ran under the Progressive Bull Moose Party. Although Democrat Woodrow Wilson won the election, Roosevelt received more popular and electoral votes than Taft representing a small victory in defeat. In all, Pinchot played a consequential role in leading the opposition to the Taft Administration and recruiting Roosevelt to challenge his handpicked successor. 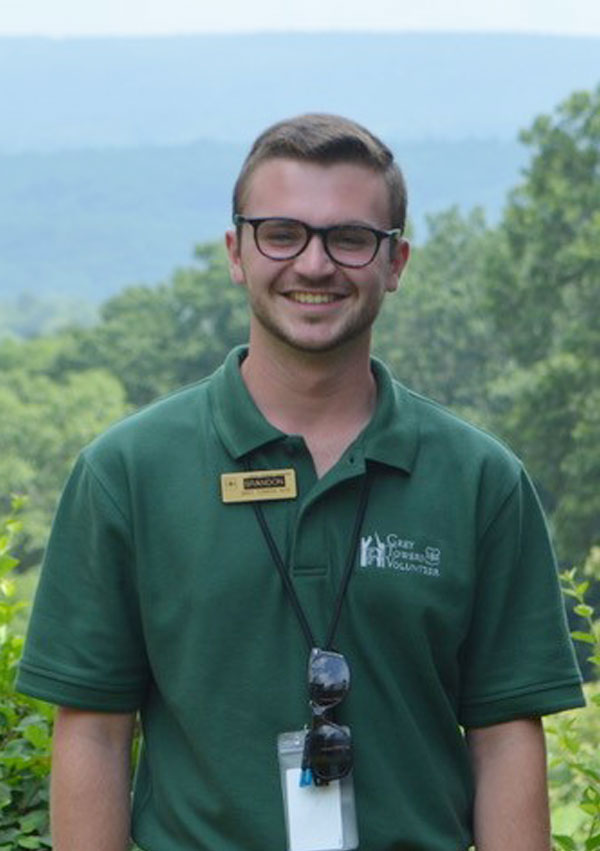