I am often quiet at first, observant of my surroundings and the people I meet. This may be a learned behavior born from my tendency to be clumsy. Observing my surrounding helps me avoid spills that, despite these attempts at prevention, are inevitable. But I have to credit my clumsiness and observation for bringing about the event that helped me understand what I was doing here at Grey Towers.

During my first trip to the Laurel Hill Burial Ground, while checking out five footstones off to the northeast side, I tripped on a stone peeking out from the ground. With some investigation and a little digging, I lifted the overgrown earth and found the headstone of Rosa Kircheis. Often it’s said that someone stumbles upon a discovery, but how frequently can it be taken so literally?

After a bit of excitement and celebration on my part, Heritage volunteers and I went to work probing around for any more in the area. One by one the rest of the stones were uncovered—Erana and Julia, then Haupold and lastly, little Ichan. One headstone for each footstone! All with names, dates, and artwork too! 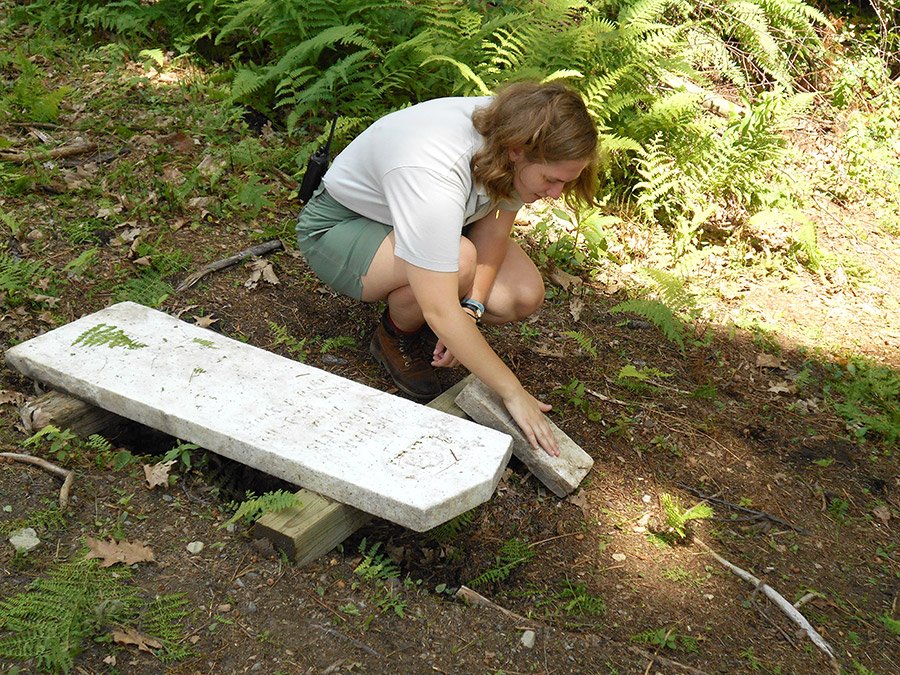 A picture of this family and their situation began to form in my mind. Erana was the eldest of the bunch at age fifteen, and the first to pass away on the 9th of May. Twin siblings Julia and Haupold, both age nine, died only a day apart on the 11th and 12th. Their eleven year-old sister Rosa passed away on the 12th as well. After a two day respite from tragedy, May 15th brought the heartbreaking death of the youngest, Ichan, only four years old.

Uncovering this information sparked within me a strange sense of responsibility. I felt close to this family, their unexpected heartache became mine as each stone was exposed. I developed a bit of a protective mentality over them. Their stones had fallen and been forgotten over the years and I couldn’t bear to see that happen again.

This event gave me the push to dive into this project headfirst. I was interested and excited, but most importantly, I cared. It was no longer just an organizational project consisting of papers to sort through and documents to update, but it became a quest to make sure that this site and the people laid to rest within it were not forgotten.

Death is hard to accept. There’s nothing in the world that is a more natural part of the cycle of life, yet so feared and incomprehensible. But to understand where we come from and where our lives will go, we have to recognize death. Burial grounds are not only a resting place for those that we’ve lost, but also a site to reflect and remember the lives of these people. As locations like the Laurel Hill Burial Ground are used less frequently by the community, they often go into disrepair. But allowing the monuments to these people to fall by the wayside or sink back into the earth does them a disservice.

That’s what I felt when I saw the state of the Kircheis stones. The individuals buried in this cemetery, though they may not have conquered lands or led nations, deserve to be remembered and have their stories told.

These five stones have since been documented, cautiously removed from the dirt, and carefully cleaned. They have been restored and await the assistance of metal support frames to stand them up in the places they belong.

I know I am not alone in my enthusiasm and concern for this burial ground. I was certainly not the first to recognize its importance. As part of the Grey Towers National Historic Landmark District, Laurel Hill Burial Ground is recognized as an invaluable historical space in Milford. A great number of dedicated people throughout the years have worked to preserve, document, research and restore this site. Through the care and stewardship of the Forest Service and the Grey Towers Heritage Association, the burial ground continues to be maintained by these dedicated staff members and volunteers.

This process is always ongoing, however. These historic sites thrive when they have a community of people devoted to lending a hand to help with upkeep.

If you happen to be interested in getting involved and helping preserve this valuable community asset, feel free to contact the Grey Towers Heritage Association or GTHA President by email at info@greytowers.org or call 570-296-9625. 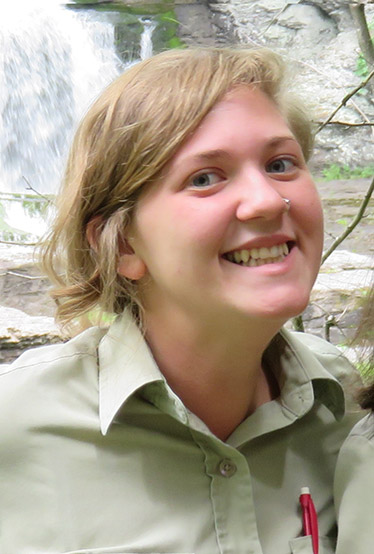 Maggie Jordan is a museum and programs intern at Grey Towers National Historic Site. She recently graduated from Kutztown University with a Bachelor of Arts in History and minor in Art History. Maggie catalogues museum collections, guides mansion tours, and organizes research materials for the Laurel Hill Burial Ground.