On June 30, 2016, Melissa had the opportunity to interview the 17th Chief of the U.S. Forest Service during a National Leadership Conference at Grey Towers. They sat on the front porch in rocking chairs, and Melissa asked Chief Tidwell questions about conservation and tourism. These are quotes and paraphrased responses from the Chief:

Melissa’s Question: What is your favorite aspect of your job with the Forest Service?

Chief’s Response: Chief Tidwell said that he has many favorite aspects of his job. He loves visiting the employees of the Forest Service and connecting with them. The Chief said that the forests provide recreational settings, and are places for people to go to refresh and have fun. Another aspect is that the Forest Service is providing places for enjoyment, which he stressed. It also connects people to the environment and improves lives creating memories that mean something for people. 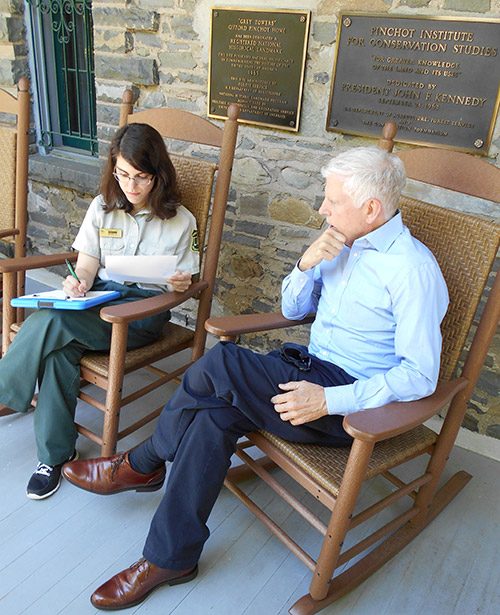 Melissa’s Question: Do you think that tourism has really helped, or has had an impact on conservation education efforts?

Chief’s Response: It has helped especially to bring awareness to the public. If you look at a burned-out forest with its polluted air and destruction, people would not want to go there. They would want to go to a clean and healthy forest. In the 1950’s, there was a large connection to the land, and national tourism occurred. The visitors’ connection to the land led to more conservation programs, which helped to inform more people. “The more that we [the Forest Service] do, the more we can help educate people, but we need the infrastructures and resources to do so.”

Melissa’s Question: What is Grey Towers National Historic Site to the Forest Service?

Chief’s Response: “The historic site is home for Gifford Pinchot, and also the beginnings of the Forest Service and conservation.” ‘Gifford always went out and did something. He was always in motion. The cleared off lands that he saw were the beginning.’ “Grey Towers was not just his summer home; a dialogue was created here, not just with the wealthy who came here, but with the community as well…Gifford did get a lot of things right, but he also had the privileges to do so, such as having the means to travel and talk to people about conservation.” “During the beginning of the conservation movement, individuals saw the forests as a place to make a profit. Gifford had said that ‘National Forests benefit society and not the individual…’ The forests provide for future generations. Through history we can really understand conservation, which we now call ‘sustainability.’ “

Melissa’s Question: What is your favorite National Forest?

Chief’s Response: “Whichever one I’m in!” ‘There is a special something in each forest. Chief Tidwell expressed having great memories and cherished moments in each one. They are special as someone is able to see sights and listen to sounds not created by humans.’

After Chief Tidwell graciously took the time to answer these questions, he attended a ceremony where he planted the first tree for the Grey Towers “Chief Tree Program,” which honors all of the current and past Chiefs of the U.S. Forest Service. It was a great day at Grey Towers. 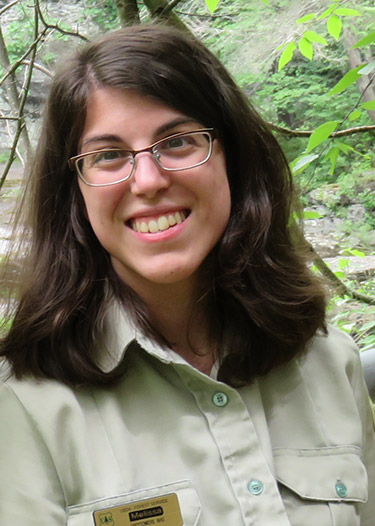 Melissa Miller is a conference and programs intern at Grey Towers National Historic Site. She is majoring in Hospitality Management with a minor in History at Marywood University in Scranton, PA. Melissa guides mansion tours, assists with site conferences, and works in the Grey Towers Gift Shop.